Need a home inspection in Laurinburg? 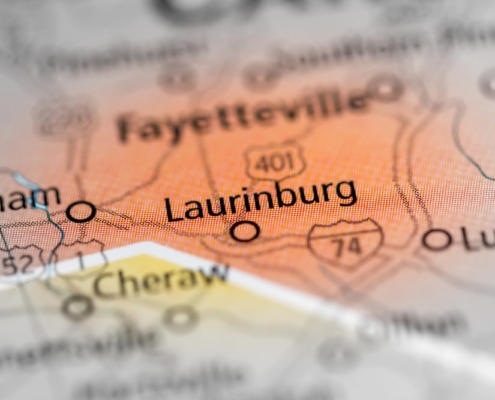 Laurinburg, NC is a city located in Scotland County, and it’s also the county seat of the area. It’s located to the south of the state near the center, near the border of South Carolina. The largest nearby major city is Fayetteville, which is located to the northeast of Laurinburg.

As of the 2010 US Census, the population was around 16,000 people, with a population density of about 1,300 people per square mile. The city was first founded in the late 1700s, and named for the McLaurins, the most prominent family in the area. It began to grow when a railroad line was built through the area in the mid-1850s, and was first incorporated as a city in 1877. In the following years, it continued to grow, becoming the first area of Scotland County with a courthouse in 1904.

As an older American settlement, Laurinburg still retains an old-world charm, and has many buildings and areas that are registered on the National Registry Of Historic Places, such as the John Blue House, Central School, Thomas J. Gill House, Laurel Hill Presbyterian Church, and the Laurinburg Commercial Historic District.

The economy in Laurinburg is primarily driven by the retail trade, educational services, health care and social assistance, and the food service/hospitality industry. Many living in the area also commute to nearby cities for employment opportunities. The unemployment rate in the area is 9.2%, which is slightly higher than the rest of North Carolina and the United States.

Transportation in Laurinburg, NC is primarily road-based. Scotland County provides the Scotland County Area Transit System (SCAT) for those who cannot drive, and the majority of other adults get around by driving. Major highways in the area include I-74, which runs through the city, as well as US Highways 501 and 79, as well as a number of state and county highways.

There are no nearby passenger rail stations, and the nearest airport to Laurinburg is Laurinburg-Maxton airport, a general aviation airport. The largest major airport is the Fayetteville Regional Airport, which is located around 60 miles from the city center.

Education is provided by the Scotland County School System, which has a total of around 6,000 students, and 14 schools, including 8 primary schools, 3 middle schools, 2 high schools, and 1 alternative school. As far as higher education is concerned, St. Andrews University is located in Laurinburg, and is a major economic driver in the area.

Interested in moving to Laurinburg, and curious to learn more about job opportunities, the lifestyle you can expect, real estate and more? We’ve put together a short list of resources you can use to get more information, and make sure that life in Laurinburg will be right for you. Take a look below, and get started.